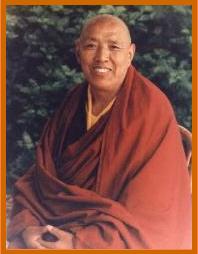 Brief history of the Center

Founded in 1980 by Ven. Geshe Khenrab Gajam, the Tibetan Buddhist Temple Gaden Chang Chub Chöling was officially inaugurated in May 1986 in Montreal, Quebec, Canada. Ven. Geshe Khenrab deepest wish was to create a center where the compassionate Mahayana Buddhist tradition, instituted by the great Dje Tsongkhapa, could flourish. To this end, Ven. Geshe Tsultrim Tenzin and two of his disciples, Ven. Zawa Tulku Rinpoche and Gen. Lobsang Tashi came to Montreal to establish a permanent monastic Sangha presence at Gaden Chang Chub Chöling. In 2014, the Center was moved in Ste Sophie, north of Montreal, under the name of Tsongkhapa Meditation Center. Through their kindness, we now have the opportunity to study and practice the Dharma and the meditation methods taught by Buddha to develop inner peace and lead a meaningful life.

Ven. Geshe Khenrab Gajam is the founder of Tibetan Buddhist Temple. Born in 1928 in the province of Kham in eastern Tibet, he became a novice monk at a very young age in the monastery of Tashi Choling Nyagon where he stayed for 4 years. Then, according to the Gelugpa monastic tradition, he went to perfect his Buddhist education in the great monastic university of Ganden. At the age of 24, Geshe Khenrab demonstrated his mastery of the various topics and began to teach. In 1959, Geshe Khenrab and many other Tibetans migrated to India. At the age of 40, he obtained the title of Geshe Lharampa, the highest degree in the Tibetan monastic system, thus completing the cycle of Buddhist philosophical studies. He reached a high level of knowledge, second in his class after the famous Pabongka Rinpoche. In 1993, Geshe Khenrab showed the signs of impermanence.

The TsongKhapa Meditation Center pursues the goal of developing Buddhist philosophy in Quebec and in Canada by teaching the Dharma of the Vajrayana of the Tibetan tradition, and by performing all actions in a charitable, philanthropic and voluntary manner while cooperating with other organizations in Canada and the rest of the world.

The Center is dedicated to the preservation of all the authentic Buddha Dharma in general and in particular the oral transmission lineages of the Gelug Tradition founded by the great master Je TsongKhapa, transmitted through an unbroken line of masters of our time, such as the great Pabongka, His Holiness Trijang Dorje Chang, Kyabje Zong Rinpoche up to our root and lineage masters.

The center offers the opportunity to study and practice the Dharma and the meditation methods taught by Buddha to develop inner peace and lead a meaningful life.