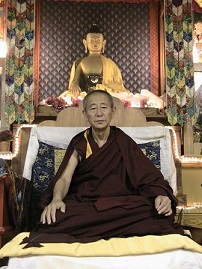 Geshe Tsultrim was born in Kham, Tibet and became a monk at the age of twelve at Gaden Jangtse monastery. Completing the study of all the divisions of Tibetan Buddhist Philosophy, he was awarded the highest degree of Geshe Lharampa. He also received an Acharya (Masters) degree at the Varanasi Sanskrit University in India. Moreover, he gained qualification in Vajrayana Buddhism after studying for one year at the Gyumed Tantric College. Geshe Tsultrim teaches at many Buddhist temples and monasteries in India, Tibet, Europe and North America. He has been responsible for the education of many monks, guiding them from a young age to maturity. Geshe Tsultrim is a very dedicated and compassionate teacher.